As a librarian, I know I should be the first to admonish â€œdon’t judge books by their coversâ€. But who am I kidding? I love judging books by their covers! It’s right up there with judging figure skaters based on their outfits rather than technical skills! So I’m always extra-interested when a book is released in a short span of time with two different covers. Frequently this happens when the paperback edition of a new book is released. The cover makeover that most recently caught my eye and provoked strong emotions is Mare’s War by Tanita S. Davis, published by Alfred Knopf, a division of Random House. Let’s start with the facts: Mare’s War is a great story. Not just in my humble opinion, but also according to the Coretta Scott King award committee, which awarded it an author honor in 2010. However, in spite of the critical acclaim and some featured spots in past YA displays, it has circulated at my library a total of 1 time. I think I blame this cover: 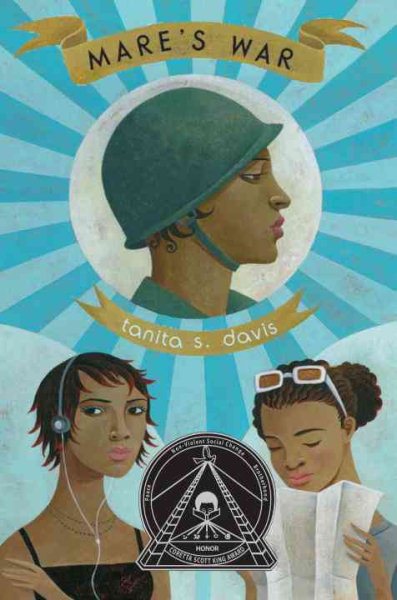 The artwork skews much younger than the teens it could appeal to. There is also something about the way the eye is drawn to the central figure of Mare that screams â€œI am Historical Fiction!â€ and makes it really easy to overlook the contemporary characters depicted below. Now, some people including myself are ardent fans of historical fiction, and maybe to us this book looks great. But we’re not the ones who need to be sold on a title like this. So how do you draw in readers that are maybe more attracted to the contemporary storyline, without overlooking the importance of the historical subject matter? I give you the brilliance that is Cover #2: For one thing, it’s simpler than the original, streamlined, and graphically packs a bigger punch. Perhaps in the future photographic covers will look dated, but at the moment they just speak to the most current technology: with every cell phone equipped with a camera these days, photography is the medium that feels familiar, but still exciting. This cover looks sophisticated. It looks a little dangerous, slightly sexy but not vulgar, and the amount of color is just right. Your eye may go to the pink lipstick first, but the next thing it will notice is the shimmery green of Mare’s helmet. Bam! Cool first, historic context second.

Then there’s the issue of race. You may remember a recent controversy in the world of teen literature around the book Liar, by Justine Larbalestier, in which the main character is mixed race, half African-American. The originally proposed cover depicted a teen that didn’t at all match the character depiction.  Not only was the â€œwhitewashingâ€ of the cover ideologically problematic, it truly contributed to the understanding of the story. The narrator in Liar is unreliable, to say the least. The reader already must choose what and how much to believe, with a cover that contradicts the stated descriptions in the story a whole extra level of uncertainty and narrative betrayal is added. The book was ultimately published with a cover depicting a teen closer to the description in the story, but many important discussions were raised about covers featuring accurately depicted non-white characters.  Back to Mare’s War, cover #2. Way to go again! In addition to the striking silhouette created by the beautiful lighting on the model’s face, Mare is accurately depicted as African-American. And if you’re familiar with books like Sister Souljah’s popular The Coldest Winter Ever and Midnight: A Gangster’s Love Story, which have high teen appeal even though they are likely to be shelved in adult fictionâ€¦well, the second cover of Mare’s War would look right at home next to them. And with it’s historic subject matter, Mare’s War is a great choice for Black History Month reading this Februaryâ€”I hope the new cover gets it noticed!

But cover redesign doesn’t always work out so well. Compare, for example, the covers of Audrey, Wait! By Robin Benway 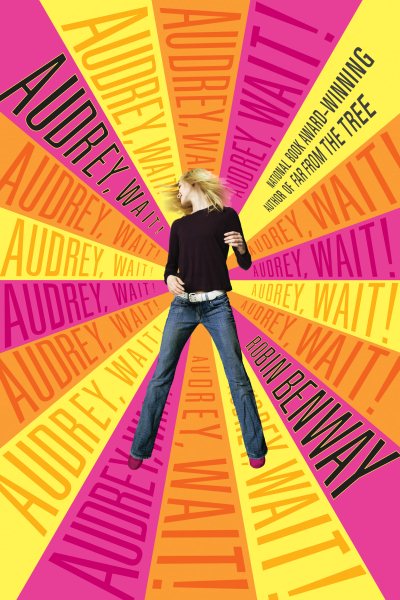 The original cover shows Audrey, thrashing her hair like a rock star. All the color draws your eyes into her, just as Audrey the character is the center of media attention after her ex-boyfriend writes a huge hit song about their break-up, also titled â€œAudrey, Wait!â€. Audrey can’t escape from the song, and the original cover shows it surrounding her, almost attacking her! The paperback cover, on the other hand, tells you nothing about the story, the character, or anything really. It’s generic and missing the action and life of the original cover. The paperback version was brought to my attention by avid library teen reader Deanna Goudreau. She’d loved the story, and like me has some strong feelings about book design. She commented â€œThe cover that was originally used for Audrey, Wait! is much more eye-catching than the cover being used now. When most people look for a good book to read the cover has a huge impact on the reader choosing that book.â€  I agree. But what do you think?

6 thoughts on “Judging (and Re-Judging) Books By Their Covers”