Playlist from the pages of Ship Breaker by Paolo Bacigalupi 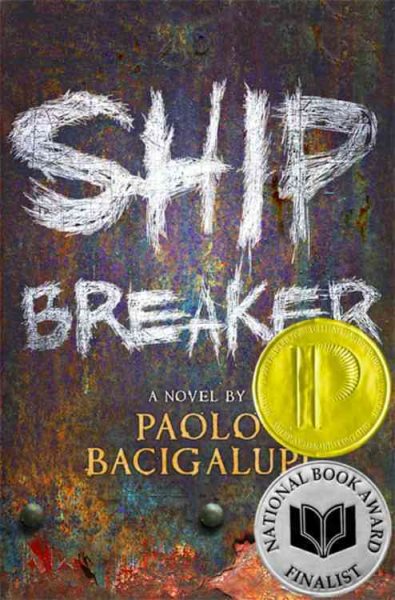 I recently had the idea to make playlists based on YA books I’ve read, because the truth is I will use just about any excuse to make a playlist. Road trip playlist? That’s child’s play. Playlist for getting a cavity filled? Now that’s a challenge! I think it is so interesting to be inspired in one medium, like a beautifully written book, to create something in another medium, like the musical collage that is a good playlist. So for my first book I chose the recent 2011 Printz Award winner Ship Breaker by Paolo Bacigalupi. A bit like deciding to go for a nice walkâ€”up Mt. Kilimanjaro! Ship Breaker is a story with a lot of themes woven inâ€”loyalty, survival (at what cost?) and the cautionary subtext of environmental destruction that has set this future world on its bleak path. Our hero, Nailer (a.k.a. Lucky Boy) keeps reminding himself that it’s not enough to be lucky in the world, you have to be smart, too. He’s tough, strong, and after a lot of hard breaks still not afraid to dream of a better life aboard the clipper ships he idolizes. Belief in the Fates plays a role in this story, too. But curiously, there is very little mention of music within the actual story. I guess in a world that is so focused on survival, scavenging whatever you can from the wrecks of a past humanity leaves little time for song.

1. Wake Upâ€”Arcade Fire .â€œOur bodies get bigger but our hearts get torn up.
We’re just a million little gods causing rain storms turning every good thing to rust.â€
2. Oil and Waterâ€” Incubus.  I think of this as Nailer and Nita’s songâ€”two people from such different worlds. Oil and water are huge parts of their lives, and part of what brings them together.

3. Pull Up The Peopleâ€”M.I.A. Nita is such a complex character she deserves her own theme song. I just had a really hard time coming up with one! She’s worldly, smart, tough, and sometimes a snob. She doesn’t complain about hard work, but she also doesn’t always know what people outside her world have to deal with. In spite of sometimes acting like she is above the ship breakers who save her, you know that she wants to try to do right in the world, and that there shouldn’t be as much disparity between their circumstances. I chose M.I.A. because she seems like a personality Nita could relate to, and the lyrics â€œPull up the people, pull up the poorâ€ represent what I hope she can do in her future position of power.

4. In Fate’s Handsâ€”Red Jumpsuit Apparatus. Even though much of Nailer’s life relies on the relationships he has, like the loyalty of his crew, this song makes me think specifically of the part of the book where he, Nita, and Tool are depending on each other for their survivalâ€¦depending on each other, and the kind hand of the Fates. â€œI remember a year ago I was standing in the crowd waiting for my chance to break through, my chance to live again. /Now it seems I’ve found some friends who finally understand what it takes to make this dream come true, we’ll be here till the end.â€

5. Ambling Alpâ€”Yeasayer. One of the most heartbreaking parts of this book for me was the relationship Nailer had with his father. I like to think that if Richard Lopez could have gotten his life together and given his son some advice it would have been this song. â€œAnd if anyone should cheat you, take advantage of, or beat you/ Raise your head and wear your wounds with pride/ You must stick up for yourself, son/ Never mind what anybody else doneâ€

What do you guys think? Do you agree with my song choices? Do you have any that you’d like to add?

–Mia Cabana currently reading Nothing by Janne Teller, and listening to A Hat Full of Sky by Terry Pratchett