Whenever something seems to keep randomly showing up, I pay attention.  Carl Jung called this synchronicity.  I follow it and it never fails to bring something interesting. Towards the end of last year, I kept running into things that were about France: great books, great video blogs, and a great croissant.  I will tell you about the first few here, and then you can go out in search of your own pastry to complement them.

Revolution by Jennifer Donnelly
Andi is in a dark place.  Guilt-ridden over the death of her younger brother, she is unable to move through her grief.  Her only solace is in music, and, if she could muster some interest in it, her senior paper about (unfortunately fictional) French guitarist Amade Mahlerbeau.  Her father brings her to Paris to get to work on her paper.  There, Andi discovers an old guitar and the journal of Alexandrine Paradis, a girl her own age living during the French Revolution.
The gritty underside of Paris is explored- quite literally, as Andi and her new-found musician friends venture into the catacombs.  The historical side of Paris is explored as we read Alex’s story of life during the Revolution. This book brings together a lot of disparate things: genetics, music theory, allusions to Dante’s Divine Comedy. It would be overly complex if it were not so beautifully woven together. [Revolution made YALSA’s 2011 Top Ten Best Fiction list.]

Bizarre connection: Both of these main characters are seniors in high school sent to France at the insistence of their fathers. 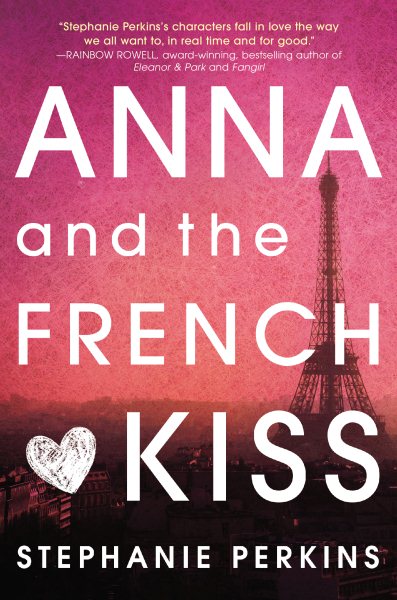 Anna and the French Kiss by Stephanie Perkins
In this sweet and quirky romance Anna is sent to an elite boarding school in Paris for her senior year. She falls in with a close group of friends, including the handsome and intriguing Etienne St. Clair. He’s very worldly,  from Paris, London and San Francisco, and has an adorable British accent. Circumstances keep coming between them, he has a girlfriend, she has two near misses with dating other guys, but their affection turns to love over the course of the year.  The closeness between these two characters and their witty banter, develops over time and feels very real.  The setting is vivid both in its portrayal of dorm life and presentation of  Paris in all of its romance.  The city’s landmarks, cinemas and patisseries are a bright and textured backdrop for the story.

Bizarre connection: Stephanie Perkins is a Nerdfighter, a fan of John Green and a member of the online community surrounding John and his brother Hank.  She sent him a copy of Anna and the French Kiss before it was published.  He reviews it, and also loves it here.

These videos provide a humorous speedy version of the events of the French Revolution, complete with amusing illustrations.  I might use this if I was studying for a European History test or just to bulk up on historical trivia.

Bizarre connection (back to Revolution): Knowledge of the history of the French Revolution will help you understand some of the events towards the end of Jennifer Donnelly’s Revolution.

So that’s my three things about France.  There are obviously many others out there to stumble upon if you are intrigued.  Start with these, and see what else comes your way.

–Erin Daly solemnly swears she is up to no good, as she has been re-reading Harry Potter and the Prisoner of Azkaban.