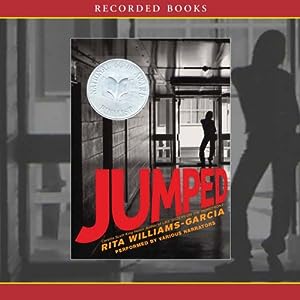 Jumped is the story of one day in the life of three very different girls at a huge urban high school in New York City. There’s Trinia, a pretty, self-involved artist who’s sure she’s bringing beauty and color to the lives of everyone around her, regardless of what they really think. There’s Leticia, who skates by on minimal effort; she’s more interested in her cell phone, her nails, and gossip than school. And there’s Dominque, an angry basketball player who’s been benched for low grades. When Trinia unknowingly offends Dominique, Dominique declares that she’s going to â€œgetâ€ Trinia – and Leticia is the only witness. Will Leticia warn Trinia? Will she let the beatdown happen?

Jumped is a painful look at violence in young people’s lives. It was a National Book Award finalist in 2009, and its easy to understand why. On the surface, this story’s about Leticia deciding whether or not to intervene in the fight, but it’s really a portrait of life in an inner-city high school, and of the three main characters in particular. At times it was hard to listen to Jumped, because it paints such a grim portrait of these three young women.  Although each of the characters have sympathetic moments, all three are basically unlikable and spending a whole book with three unlikable characters is pretty hard. Trina is self-involved and clueless. Leticia is totally lacking in empathy. Dominique is an angry, angry young woman. I didn’t really enjoy the story, but it’s an important one, and author Rita Williams-Garcia does a fantastic job developing the characters and painting a picture of their lives. I might not have liked Trinia, Leticia, or Dominique, but I understood them.

Each chapter of the book is narrated by one of the three main characters, and in the audiobook each character is voiced by a different reader. The readers- Shari Peele, Cherise Booth, and Bianca Vasque- bring Garcia-Williams’ words and characters to life. They beatifully capture the cadences of each character’s speech, from Trina’s bubbly, self-assured â€œWhat?â€ to Dominique’s brusque, blunt anger. The narrators are introduced at the beginning of each chapter and they’re easily distinguishable from each other, so it’s not hard to follow the action, even when the chapters are very short.

Jumped isn’t exactly fun, but it’s interesting and powerful. And, bonus, it’s a quick listen, clocking in at under 4 hours. Jumped has been nominated for YALSA’s 2012 Amazing Audiobook list. You can see a list of all the current nominees for yourself right here so be sure to check it out!