Teens’ Top Ten is a â€œteen choiceâ€ list, where teens nominate and choose their favorite books of the previous year! Nominators are members of teen book groups in fifteen school and public libraries around the country. Nominations are posted on Support Teen Literature Day during National Library Week, and teens across the country vote on their favorite titles each year. Each day during the month of May, The Hub will feature a post about Teens’ Top Ten. Be sure to check in daily as we visit past winners and current nominees!

For my post this month, I bring you a review of one of this year’s nominees, Behemoth by Scott Westerfeld. 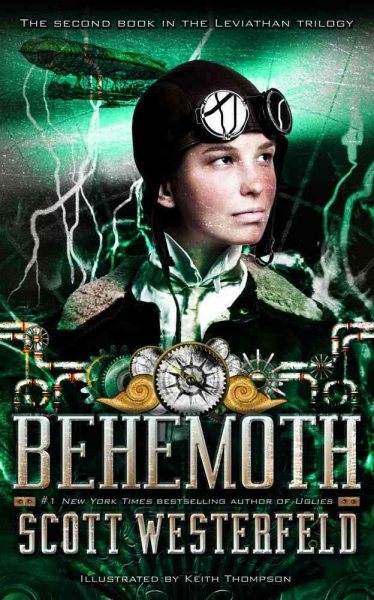 Like many of this year’s nominees, Behemoth is a sequel. In Leviathan [reviewed on The Hub here], Westerfeld introduced us to an alternate history World War I, where  Darwinists and their  creatures are pitted against  Clankers, and their machines.  Both groups get into the spirit of steampunk by creating a collage of elements that work together to form a  stylish picture of archaic-seeming technology.  Deryn Sharp poses as a boy to join the crew of the Leviathan, a massive airship that resembles a flying whale and  contains its own ecosystem.  Prince Aleksander, son of the assassinated archduke Franz Ferdinand,  flees from his home in a mechanical  stormwalker with minimal crew.  The two collide when the Leviathan crashes in Switzerland.

Behemoth picks up with Alek and his small band of Clankers still aboard the Leviathan as it voyages to the Ottoman Empire.  Istanbul is a Clanker city, but one with the influence of many cultures.  Many of the machines the protagonists encounter here are inspired by animals, bringing an interesting dimension to Westerfeld’s world- Clankers and Darwinists are perhaps not mutually exclusive in steampunk style.  Giant mechanical elephants bring characters into the city, and the dragon-headed Oriental Express makes an appearance.   Keith Thompson’s illustrations show machines and creatures alike  in thrilling detail.

The action-packed plot keeps Deryn and Alek on the move between sky battles, chase scenes, mechanical walker showdowns and a creative weaponization of chili powder.  Short chapters alternate between their two perspectives.

The relationship between the two main characters deepens as they continue to trust each other with many, though not all, of their secrets.  Their camaraderie is a steadying force for Alek, and generates awkward sweetness from Deryn, who wishes it could be something more.

Seeds are sown for many interesting things to come.  A mysterious Darwinist creature with powers of observation is introduced. Hints that while European Clankers and Darwinists are at war, the two cultures blend more in other parts of the world suggest the potential for  some very interesting settings in the next book,  Goliath, which will be out later this year.

The fabulous steampunk setting and fast pace of this book make it a strong contender for this year’s top ten list.  Will it be included? That’s up to you!  So be sure to cast your vote between August 22 and September 16 at www.ala.org/teenstopten