Teens’ Top Ten is a “teen choice” list, where teens nominate and choose their favorite books of the previous year! Nominators are members of teen book groups in fifteen school and public libraries around the country. Nominations are posted on Support Teen Literature Day during National Library Week, and teens across the country vote on their favorite titles each year.  Each day during the month of May, The Hub will feature a post about Teens’ Top Ten.  Be sure to check in daily as we visit past winners and current nominees! 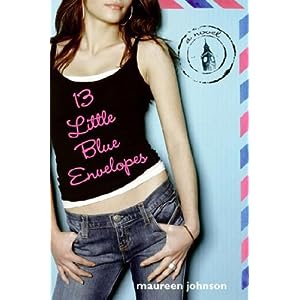 Ginny Blackstone is seventeen and missing a well-loved aunt, who has not been in contact for quite some time.  Out of the blue, she receives a package with–you guessed it–13 blue envelopes, each with a clue or instruction, each of which can only be opened when the previous clue has been solved or directive has been met.  And so, she sets forth to England with a backpack and a credit card.

And here we stop with my first interjection–which has been echoed in reviews on Goodreads and other sites.  Where are her parents?  She does have them, they’re mentioned, and I’m pretty sure she lives with them.  But she doesn’t seem to tell anyone she’s leaving, and she can’t make contact with anyone in the States while she’s traipsing about Europe–letter’s orders.

When she reaches London, she is magically taken in by Richard, who works at Harrods and brings to mind a Mark Darcy/Henry Dashwood era Colin Firth (at least to me).  It is from here that her real adventure begins, and where she encounters an array of fascinating people, sites, and situations.

Any more than that would completely spoil the story.

As obvious from the title, The Last Little Blue Envelope is about another blue envelope.  Here’s a minor spoiler for the first book: she doesn’t make it to the thirteenth blue envelope.  So here, in this sequel, is where her next adventure begins.  Some old friends make appearances, and we meet a few new ones.  Off, to the adventure!

Overall, I love Maureen Johnson’s narrative style (and she’s quite the character to follow on Twitter).  In 13 Little Blue Envelopes, Ginny possesses both innocence–though her trusting nature can get a little senseless–and interior snark, which makes her escapades much more fun to follow.  While I have a few minor hangups about continuity issues (and that whole missing–apathetic?–parent thing), I can definitely see how 13 Little Blue Envelopes made it onto TTT.  I guess we’ll see next year if Last can do just as well.