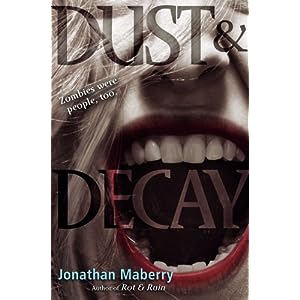 Beware – Dust & Decay is the sequel to Rot & Ruin, and there are spoilers for Rot & Ruin below! If you haven’t read the awesome Rot & Ruin yet, go out and get it before you read this review.
It’s been half a year since Benny, his girlfriend Nix, and his zombie-slaying older brother Tom saw a jet flying east over the wasteland known as the Rot and Ruin. Six months since Benny, Nix, and the Rot and Ruin’s mysterious Lost Girl Lilah fought a bloody battle against bounty hunters who were kidnapping children to make them fight in the zombie pits. Under Tom’s tutelage, Benny and his friends have been training hard, and now they’re ready to leave the comfort of their hometown Mountainside and head east to find out where the jet came from. Unfortunately, things rarely go as planned in the wild Rot & Ruin, and Benny and co. find themselves swept in a battle they hadn’t planned to fight.

This book reads very much like the second book in a series, which it is. Dust & Decay has a lot of similarities to its predecessor, Rot & Ruin, but everything is more extreme. The bad guys are scarier, the battles are bloodier, the cast is bigger. The plot of the book doesn’t do much to advance the overarching story of the series, but it sets up plenty of mysteries and action for the next book.

Reservations about the plot aside, Dust & Decay is a fantastic, engaging, gross-out, action-packed read. Benny and his friends struggle with all the growing pains of adolescence, and Benny’s sense of humor is pretty typical for a teenage boy. More than the previous book, Dust & Decay deals with loss, grief, and anger. It has a surprisingly amount of heart for a zombie-thriller, and it continues the series’ habit of hiding big questions about what it means to be human, to be an adult, and to be a friend in the middle of seriously scary action sequences.

Dust & Decay doesn’t come out until August 30, so you have plenty of time to catch up by reading Rot & Ruin first – and you definitely should!