31 Days of Authors: Terry Pratchett with an assist from Stephen Briggs 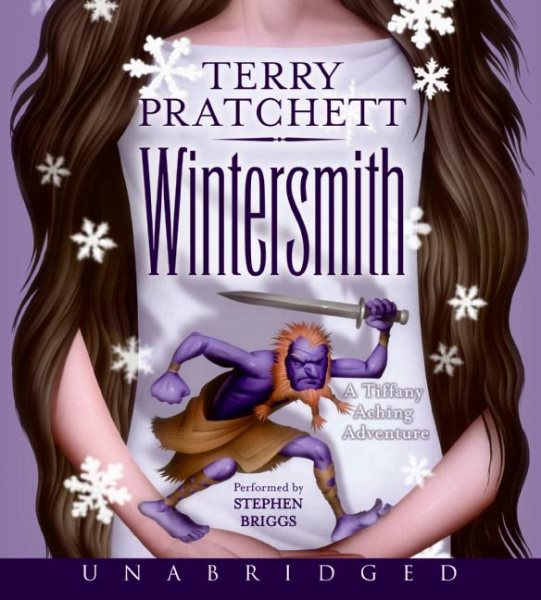 I can say two things to kick this post off, and both of them are absolutely true:

1. Terry Pratchett is one of my favorite authors

2. I have never read one of his books.

Woa, what? How can both of those statements be true? Thanks to the vocal artistry of Stephen Briggs, the amazing voice that brings Terry Pratchett’s books to life, I have enjoyed all of my favorite Terry Pratchett stories by listening to them as audiobooks. It’s no secret that Terry Pratchett is awesome; in fact, YALSA awarded him the 2011 Margaret A. Edwards Award for lifetime contribution to teen literature. His books are wildly creative, action-packed, and witty beyond compare. I am particularly fond of the Tiffany Aching series, which tells the tale of a young witch discovering her powers and follows her through teendom, as she gains more confidence, wisdom, and stolen gifts from the Wee Free Men.

As amazing as Mr. Pratchett’s ability to write such a very real teen girl character is Stephen Briggs’s ability to bring all of his characters to life. I’ll confess that I’m a bit of an audiobook snob– if a reader’s voice, or even just the voice that they use for one character, is grating on my nerves at the beginning of a book, chances are I’ll want to use the CD as a Frisbee by the time I get to the end of a story. I can only imagine how hard it is to portray a different gender or age using voice alone, which makes Mr. Briggs’s reading all the more impressive to me.

Terry Pratchett’s books feel like they are meant to be heard out loud. So many funny turns of phrases and puns have caused me to laugh out loud while driving alone in my car, and it is thanks to the excellent comedic timing and phrasing of Mr. Briggs’s reading. On the other hand, the same way Mr. Pratchett’s writing can convey some of the most moving emotions I’ve ever encountered in a story without veering into sentimentality or heavy-handedness, Mr. Briggs’s reading is always infused with sincerity. And a host of British accents! (Did I mention what a sucker I am for a good accent?) As I listened to the story of Tiffany’s adventures, my belief in her was complete. But I also believed in the feisty Wee Free Men with their delightful Pictsie brogues, and the voices of the wise old witches that Tiffany learns from, and creatures so fantastic that their voices are the product of expert imagination. It’s no wonder that these audio books regularly land on YALSA’s Amazing Audiobooks list!

One of my favorite aspects of these stories, in the audiobook format, is that they appeal to such a broad range of  listeners. I’ve shared them with kids at the library too young to recognize all the vocabulary on their own, and I’ve also gotten my father addicted to them. You can claim that a book may not be your cup of tea, but it is almost impossible to resist getting sucked into the story if you’re hearing it read out loud with the excitement and irreverence a narrator like Mr. Briggs’s brings to them. Do you remember being read to as a little kid? How maybe you would beg your parent or teacher for one more chapter because it was THAT GOOD? I’ll let you in on my third secret of the day: it’s still that good.

A lot of people make the cliche claim that “teens don’t listen” –step up and prove them wrong! Because experiencing the marvelous writing of Terry Pratchett, as read by the talented Stephen Briggs, is something that may change the way you experience stories for years to come.

Published in Awards and Selected Lists, Booklists and Essays & Analysis