As the year winds to a close, don’t miss your opportunity to nominate a title for YALSA’s William C. Morris Award. Through the last year, I’ve highlighted a number of titles worthy of nomination and worthy of a little space on your shelves and your reading lists. Here’s a look at some of the debuts coming out this month.

Jeyn Roberts offers up a post-apocalyptic thrill ride this month with her Dark Inside (Simon and Schuster, 9781442423510). Mason’s almost lost his mother to a car accident, and while he spends his time at her side in the hospital, the world outside is crumbling–literally. Aries survives a wild bus ride like she’s never experienced before, while Clementine finds herself a sole survivor of a murderous meeting at city hall. And Michael has just found himself the witness to heinous brutality, though he survives. The world around these four teens is ripping apart, and they have to depend on one another to survive. But are they smart enough or strong enough to do it? This one should appeal to fans of fast-paced, thrilling novels. 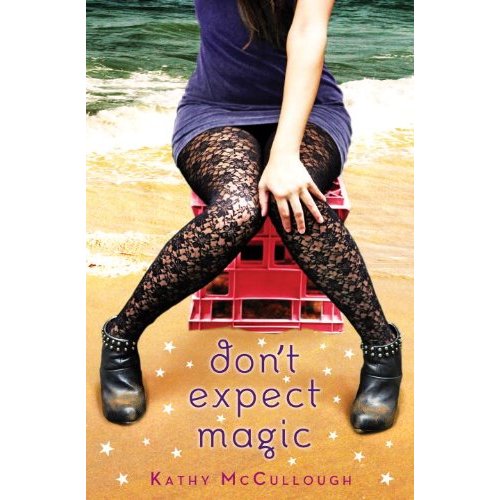 Like a little magic and wishful thinking? Kathy McCullough’s Don’t Expect Magic (Delacorte/Random House, 9780385740128) follows Delaney as she deals with just about every injustice there can be: her mother’s dead, her best friend lives on the other side of the country, and she lives with her father who is a famous “life coach” and not all that relatable to her. That is, until he reveals to Delaney that he’s descended from a line of fairy godmothers and that gene is hereditary. If she is someone’s fairy godmother, though, what sort of power does she really have? And who can she look to for help in overcoming the tremendous pain in her own life? This book sounds appealing to those who like a little magic and fantasy in their reading.

Shatter Me by Tahereh Mafi (Harper Collins, 9780062085481) earned a lot of pre-publication buzz at both Book Expo America and the American Library Association conferences and part of the appeal, I think, is in how deceptively simple the premise sounds. Juliette has a powerful touch–the kind that can attract and repel people instantly. And that touch is just what her government, The Reestablishment, wants to use as a weapon. But she’s not going to go down without a good fight. Of course, expect a little romance to emerge, too.

One of my favorite reads this year was Hannah Harrington’s Saving June (Harlequin Teen, 9780373210244). This emotional contemporary follows Harper Scott as she puts together the pieces of why her sister June killed herself. Harper had always felt like an outcast against her perfect sister, but in the wake of her death, Harper begins seeing that perfection wasn’t what it seemed. In the midst of dealing with the death, Harper’s parents plan on splitting up, too, further pushing her needs outside. So she does what she feels she needs to: she steals her sister’s ashes and her best friend Lainy and decides to drive from her home to California, a place June always wanted to go but never got the chance to. That’s when Jake enters the picture; he insists on joining Harper and Lainy on their trip, even though neither girl knows him well. But over the course of their trip, Harper learns Jake might know the truth about her sister and the truth of a whole lot more.