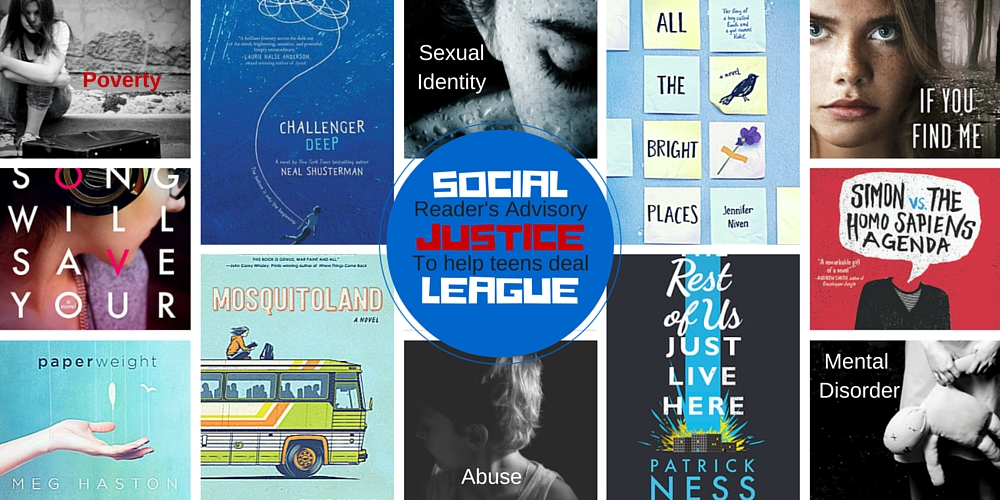 Nearly Boswell lives in a trailer park with her exotic dancing mother and is obsessed with newspaper ads.  When a serial killer begins leaving cryptic clues in newspaper ads, Nearly maybe the one one who can solve them and the case.

Amber lives on a bus but is a glass half full kinda person but when a tragic event occurs, will that event threaten her optimism?

Tyrell lives in a homeless shelter with his mother and brother. His father is in jail, his love life is complicated, and he feels the pressure to get out of the shelter.  Will his means to an end land him in jail like his father?

Simon isn’t quite out of the closet and neither is Blue, his anonymous email friend. When Martin accidentally sees Simon’s emails, Simon finds himself on the other side of blackmail and is forced to hook up Martin and his friend Abby.

Austin loves his girlfriend or maybe he’s in love with his best friend, Robbie.  Meanwhile, man-sized praying mantises have taking over his little town.

Stevie’s life is upside down. Her mother is gone, she drinks too much, she starves herself, and she killed her brother.  She now finds herself in an eating disorder rehab facility where she must deal with her mother’s abandonment, her eating disorder, and her brother’s death.

Elena has a daily goal to reduce calories. Elena is vanishing.  This story was co-written by Elena’s mother, Clare, and is told over a five year period.

Andrew is a loner and he sits and waits to shift into a werewolf.  Told in the present and the past, Drew flashes back to a tumultuous summer with his siblings and cousins.

Eleanor is the new girl.  She has frizzy red hair, she wears baggy men’s clothes, and lives with her 4 brothers and sisters and her mother and stepfather in a two bedroom house. Park is half white, half Korean boy who lives in the shadow of his taller younger brother.  Together, Eleanor and Park find love for comics, music, and each other.

Carey and her younger sister sit in a trailer deep in the woods and wait for their mentally ill mother to return.  They are filthy, hungry, and scared when a stranger comes to rescue them.  Living with her new family, Carey must learn how to survive in the suburbs while desperately trying to keep a secret.

Blue has been told that she will cause her true love to die.  When she befriends four private school boys and joins their hunt for a mythical king that promises one wish, Blue finds herself in love.  What is she to do?

Since the fourth grade, Elise has been ignored by her peers.  The summer before her junior year, Elise spend hours trying to become a new person so she can be liked. But when the plan fails she discovers a new passion, DJing.

Madeline suffers from the bubble boy syndrome where she’s allergic to everything and can’t go outside. Her only human contact are her mother and her nurse. One day a new family moves in and she fall in love with Olly.

Bone Gap Illinois is a little town that has gaps where one can fall into and never find their way out.  When Roza goes missing and creepy Finn doesn’t help her, the town suspects Finn but Finn suspects a mysterious stranger.

Leila is on a road trip to the Northern Lights and along the way she meets Hudson, Bree, Elliot, and Sonia.  As Leila sets on a journey to find herself, the lives of these four teens have been greatly impacted by her friendship.

Allyson and her best friend are on a European trip the summer before their freshman year in college when Allyson spends one adventurous day, and night, with a charming actor named Willem.  When Allyson awakens the next morning and Willem isn’t there and doesn’t contact her after she arrives back in the states, the mystery of his disappearance consumes her life.  Did Willem use her or did something tragic happen?  Allyson decides to save enough money to return to Paris for answers and discovers a lot about herself along the way.

Caden is a lot of things.  He’s an artist, he’s a sophomore, he’s a member of the crew on a sea vessel.

Mim is not okay. Her father thinks she’s depressed and needs to be medicated, she hates her new step mother, and now something maybe wrong with her real mother.  At this news, Mim gets on the next bus where she befriends a handsome photographer and a homeless down-syndrome boy.

Violet, the popular girl, is counting the days for high school to end so she can begin a new life. Finn, the weird kid, is counting the days that he stays “awake.” When Violet and Finn become partners in a history project, Finn saves Violet as she comes to term with her sister’s death but can Violet save Finn?

Have you ever wondered what the teens from District 3 were doing while Katniss and Peeta were saving the world? Well, wonder no more.