Tran often felt like an outsider as the only Asian student in his school growing up in Carlisle, PA. Tran’s memoir spans from his early childhood coming to the U.S. as a refugee from Vietnam in 1975 after the fall of Saigon through his highschool graduation, where he finds his “wolf-pack” of punk skaters in middle school, and shows that no one is just “one thing.” Each chapter is told through the lens of a “classic” title from his must-read list like Crime and Punishment and The Autobiography of Malcolm X, and shows what that book meant to him, and how it framed his life.

Tran’s narration captures his personality as he shares his often irreverently funny stories as well as the harder ones, as the traumas endured from the war persisted in his family’s daily life. He is the perfect narrator to get a window into this immigrant and refugee experience.

This is a great companion to other darkly humorous memoirs like Jack Gantos’ Hole in my Life and Damon Young’s What Doesn’t Kill You Makes You Blacker, as well as the graphic novel memoirs that explore the immigrant experience like Robin Ha’s Almost American Girl, Malaka Gharib’s I Was There American Dream, or Thi Bui’s The Best We Could Do. This will also pair nicely with the novels Butterfly Yellow by Thanhha Lai and A Step From Heaven by An Na about the Vietnaese refugee experience. 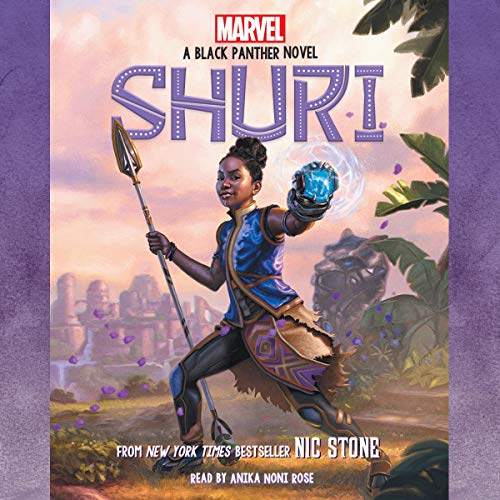 “Wakanda Forever!” Black Panther fans of all ages will love this audio because it seems as if it is a continuation of the movie. Instead of following Black Panther, it follows his younger sister. Nic Stone’s  original series allows readers to get to know T’Challa’s younger sister, Shuri.  Shuri, the protagonist, takes a voyage to safeguard her homeland Wakanda.  This series allows readers to get to know this young Black genius.

Shuri is a talented teenager who holds various titles; to include, martial artist, scientist, and a super hero.  She takes on a huge responsibility  to protect Wakanda.  She uses her skills, her intellect, and her natural gift of life to save the supply of Heart-Shaped Herb that is needed to give power to Black Panther. This piece allows us to laugh, learn, and become enthralled with this young teenager as she shares her unapologetically Black girl power.

Anika Noni Rose, the narrator’s voice is the highlight of this piece.  This piece allows young Black girls to see themselves in a positive light. In her foreign accent, it highlights systemic issues in a positive means; for example, being a Black girl scientist, and embracing your differences.  This book is a true asset for diversity in literature and can allow all people to understand the need to promote diverse texts.

Luc O’Donnell’s famous, and absent, rock star father is making a comeback, which is causing trouble for Luc.  Tabloid stories follow him with renewed vigor about his less than straight and narrow love life.  He needs a respectable boyfriend to clean up his image.  Oliver Blackwood is as respectable as they come, and also in need of a boyfriend to hold off well-meaning friends and family’s set ups. And so the fake boyfriends embark on a relationship, which, if they follow all the rules, will get them what they want and end amicably when they are no longer in need of one another.  Of course, fake dating is a lot like real dating, and as they spend so much time together, that end seems like it may be coming too soon for either of them.

A sweet and not too sappy gay romance, Boyfriend Material is a joy from start to finish.  Jameson’s narration adds life to the characters.  Luc and Oliver are both lovable in their grumpy ways.

Teens who loved Rainbow Rowell’s Carry On will love this British gay romance. Those who liked Date Me, Bryson Keller by Kevin van Whye or Red White and Royal Blue by Casey McQuiston will find similar fun here.