END_OF_DOCUMENT_TOKEN_TO_BE_REPLACED

Banned Books Week celebrates the freedom to read, to seek and to express ideas, even those some consider unorthodox, unpopular, or “other.” International books may contain elements of all those things. We celebrate them here by exploring a sampling of international YA books that have been banned or challenged at one point or another, both here in the United States and abroad. END_OF_DOCUMENT_TOKEN_TO_BE_REPLACED END_OF_DOCUMENT_TOKEN_TO_BE_REPLACED

This is Banned Books Week and I have some tweets on the topic below, but also check out the entire #bannedbooksweek hashtag for more tweets.

END_OF_DOCUMENT_TOKEN_TO_BE_REPLACED

It’s always fascinating to see the reasons why a book has been challenged or removed from a school or library. Personally, some of the reasons the books are challenged are the same reasons I think those books are great. Take the challenge in 2013 for Alexie’s Part-Time Indian: it was challenged because it presented the “crude, obscene, and unfiltered viewpoint of a ninth-grader growing up on the reservation.” That’s what makes the book so funny, accessible, and important to other teenagers!  END_OF_DOCUMENT_TOKEN_TO_BE_REPLACED

Welcome to Banned Books Week! Carolyn Mackler’s 2003 novel, The Earth, My Butt, and Other Round Things, received a Printz Honor Award and has been lauded for the realistic way Mackler discusses body issues, particularly big butts.

Contrast Virginia’s situation with that of the saucy girl in Meghan Trainor’s “I’m All About That Bass.” She’s flaunting the sexy and the profane, with some motherly advice that Virginia could have used:

Yeah my mama she told me don’t worry about your size
She says, “Boys like a little more booty to hold at night.”
You know I won’t be no stick figure silicone Barbie doll
So if that’s what you’re into then go ahead and move along I guess it’s no secret by now that I love comics (probably more than a sane person does or should), so I was really excited and happy and thrilled to learn that for this year’s Banned Books Week celebration, the American Library Association is choosing to focus on comics, graphic novels and manga and the attempts made to censor them at every level.

From Batman to teenage angst to superheroes who really aren’t that super, books that have inspired and encouraged readers to keep the lights on long after the dark has settled in have been challenged and often times removed from shelves, denying future readers the eye-opening wonder of reading these thought provoking and sometimes just plain fun stories.

In this post, I thought I’d give a brief look at the attempts to censor comics from practically the moment they were introduced as well as showcase comics’ greatest superhero â€“ the Comic Book Legal Defense Fund (CBLDF) as well as give you all a taste of some of my favorite banned & challenged comics & graphic novels.  Here we go, dear readers, into the not so distant past â€“ join me, won’t you?

END_OF_DOCUMENT_TOKEN_TO_BE_REPLACED 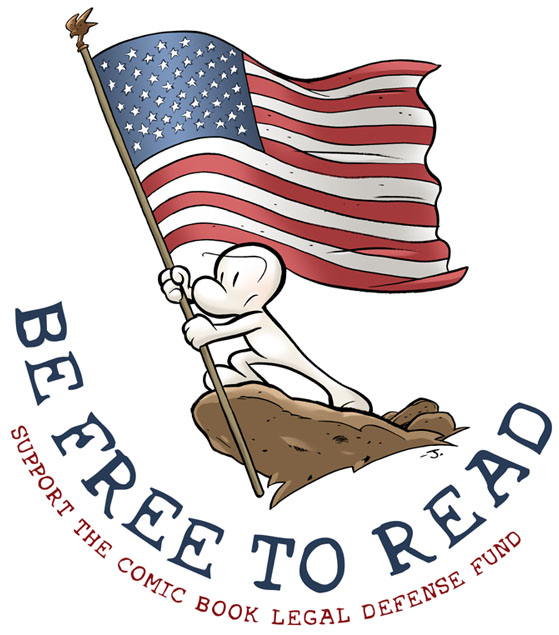 This One Summer by Mariko Tamaki and Jillian Tamaki
Rose and her family spend their summers at Awago Beach. This summer is different. Her parents won’t stop fighting and she and her friend get tangled up in some local drama. END_OF_DOCUMENT_TOKEN_TO_BE_REPLACED